How we built an (electronic) bureaucracy for 100 million

How we built an (electronic) bureaucracy for 100 million 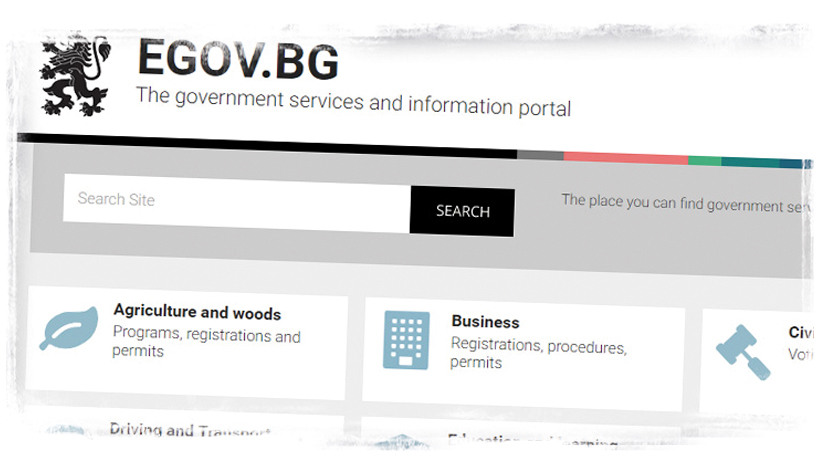 The money spent to date on eGovernment in Bulgaria is among the most glaring proofs of the saying that “if you don’t know where you are going, you’ll end up someplace else.” Without a clear vision of direction and no coordination among institutions, the process was relegated to chaos. Each government institution was given the liberty to spend from the EU funds at its own discretion–as long as it slapped the “eGovernment” label on it. After such waste, no one should be surprised that a meaningful result has yet to be seen.

No one knows how much has been spent on eGovernment in Bulgaria during the past 11 years–which is how long our institutions have been making efforts to that end. So far, there is a single undisputed fact: there is no functioning eGovernment in this country. The so-called “architecture of eGovernment” is also absent, which is why the government has embarked on building it up from scratch.

Since 2016, however, we have had the Electronic Governance State Agency (EGSA), which is supervised directly by the cabinet (the Council of Ministers) and was established under the e-government Act. So far, the Agency has only started with an analysis on how much money has been spent for introduction of eGovernment in Bulgaria, but its results are only expected next year (2018). The bulk of spending has been done along the lines of other European-funded projects–through a public procurement process: the statistics lead to a “judicious assumption” that the price tag so far has gone beyond EUR 100 million. In late 2017, in its series “Enough is Enough!” the Bulgarian Industrial Association came up with a piece mentioning “roughly EUR 1 billion.” This amount, however, does not clearly distinguish between what was spent for overall enhancement of administration versus what specifically went into eGovernment. The “provable” amount is just over EUR 100 million.

Going back down the years

It can be assumed that 2006 was the starting year for eGovernment. Yet this “birthday” has a few caveats attached as certain institutions had spent money on some type of “digitalisation” even before that. The first eGovernment-related action dates back to the late 2002 when the government adopted a strategy on how to develop it. After two updates, in 2003 and 2006, the strategy was replaced by the General Strategy on eGovernment in the Republic of Bulgaria as of December 29, 2010.

2006 saw the onset of a project named “The Integration System of e-Government” (ISEG). In early 2007, the “eGovernment control and technical center” started operation in capital’s House 3 of the government’s Boyana Residence. Back then it packed a force of 46 servers and disk space of 15 terabytes. The Cabinet parted with EUR 11.7 million for eGovernment between 2006 and 2007.

Initially, the biggest item in this budget category was the delivery of 5,185 personal and 1,100 portable computers for the administration: this was worth nearly EUR 3.8 million. ISEG consumed another EUR 2.6 million. A further EUR 1.9 million went into a project entitled “Integrated Administrative Service and Provision of Public Services”. The project implied that the Bulgarian eGovernment would provide access to all electronic services provided by the central administration from a single point.

Things kept going this same way–up to the point when the missing results finally got noticed. So, we come to September 21, 2011: by that time, Boyko Borissov had been a prime minister for two years. The government information office reported that Borissov now sat on top of a new structure decided on by his government that very day–the Council for eGovernment. The same Cabinet meeting adopted the “General national egovernment Strategy for the period 2011–2015”. The media reported that Borissov was impressed by the eGovernment built by Estonia and intended to build the same in our country–even faster. At the last Cabinet session in August of that year, Borissov issued a directive that the eGovernment be up and running within six months.

Who gave how much

In the period 2007-2014, the eGovernment effort was mainly funded through the Administrative Capacity Operational Program paid for by the EU. Most of the projects were under Priority Axis 3–Quality Administrative Service and Development of e-government. almost EUR 70 million was actually dished for this, with 65 million of it coming from the European funds and the rest from Bulgaria’s national budget.

These projects were carried out by almost all ministries, courts, state agencies and municipalities. But tens of millions have been absorbed through other operational programs as well. The key project aiming to build broadband Internet infrastructure for the needs of eGovernment was titled, “Development of high-speed, broadband Internet access in Bulgaria through the creation of critical, secure, and reliable public ICT infrastructure”; it was funded under the Regional Development Operational Program. Nearly EUR 18.5 million went into 906 km of optical cable lines in 2014-2015, connecting 29 municipalities and 24 small settlements.

The next programming period, by 2020, will mostly provide funding under the Good governance Operational Program, under the priority axis “Administrative services and eGovernance”. The total earmark amounts to EUR 139 million, of which EUR 3.13 million was taken up by November. The Strategy for the Development of E-Governance 2016-2020 alone will have access to EUR 37.8 million, with almost EUR 2.8 million of it having already been spent. All numbers quoted above add up to the previously mentioned total of EUR 100 million.

And what is the outcome?

According to one of the many definitions, “eGovernment” is related to the provision, through the worldwide web, of integrated public services that are customer (i.e. citizens and businesses) oriented regardless of time (24/7) and place.

Having spent over EUR 100 million, how close are we to the third phase? The problem is our inability to make this assessment. The gung-ho scooping up of European program funds has failed to nudge Bulgaria any closer to real and comprehensive eGovernment. It all boils down to the absence of shared direction and centralized supervision of this process. Thus, we have come to a point where everyone has computers or a new website, the money is gone–yet we don’t know how long we still have to walk.

Everything (just about) from scratch

The State Agency for Electronic Governance was established back in 2016; Rossen Zhelyazkov was appointed as its chairman in September of the same year. Twelve months later, the Agency produced its first report. The analysis of eGovernment development actions since 2007 has found that the systems and functionalities in place so far are unable to operate as a common eGovernment platform. The reason for this lies in its gaps across functionalities, technological devices, and regulatory provisions. In other words, there are both technical discrepancies to address and laws, ordinances, etc. to amend.

While presenting his agency’s report, Zhelyazkov argued that there was a gap between e-service provision and the effort to build eGovernment. Instead of the eGovernment focusing on electronic services, it creates an electronic bureaucracy. He quoted the electronic permanent address certificate, available in several municipalities, as an example. Once issued online, the citizen must again have a printout of it to take to whichever desk wants it. Is it not easier for clerks to check this information electronically? It is, but nobody seems to have ever thought about that while splurging on “eGovernment“” in recent years.

In 2018, the Agency foresees “continuing the work on transforming certification services into internal electronic administrative services”. In practice, the work is back on the starting blocks. So far, 400 e-services have been introduced–yet some of them make no sense at all. For example, Peshtera municipality offers the “registration of animal-drawn vehicles and the issuance of driver certificates”. This service targets cart owners and is free of charge. Yet obviously no one ever reckoned if this is the kind of service the locals need, or whether cart owners could benefit from it. Indeed, no one has used it yet, although it was made available more than a year ago.

The Agency’s own report says that “Available data show that efforts to build eGovernment in Bulgaria remain highly fragmented. They have so far focused on individual institutions. The latter in turn have allowed their information systems to depend on hardware, with their level of integration typically being partial and short-lived.”

This is the diagnosis. Several governments in a row have declared eGovernment as their priority. European and Bulgarian taxpayers have parted with more EUR 100 million to no avail. Now work must start again from scratch. The promise is that all administrations will be able to exchange their documents electronically by the end of 2018.