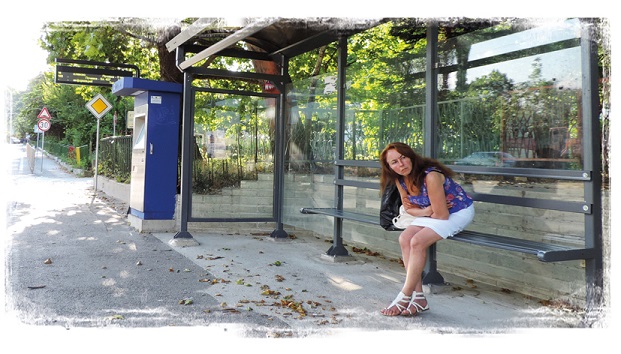 The new integrated urban transport project in Varna is worth EUR 58 million and is officially complete. Of all its components, the publicity part is the only one which is complete beyond a shadow of doubt: the municipality has paid the media to promote the project. However, locals are still waiting for the bus lane to start functioning, while ticket vending machines have been sealed with cable ties.

Varna’s Integrated Urban Transport project is the biggest one the municipality has worked on in the last 20 years. Its funding amounted EUR 58 million, most of which were grants under the Regional Development Program 2007–2013 (1). The project’s ten components included the purchase of 70 new buses, the repair of several central roads, the establishment of bicycle lanes, instalment of ticket vending machines, and the launch of a real-time traffic information system.

It was rescheduled three times. The latest “deadline” expired on August 31, 2016. Financial statements to the funding agency reveal the following outcome:

This is the “parallel reality” of state paper pushers. The other one, inhabited by Varna citizens, looks rather different. In it, the Integrated Urban Transport is about to morph into a most striking example of irresponsible and inefficient spending of European taxpayers’ money.

The 2012 grant agreement allocated EUR 15 million budget for the repair of road pavements and underground communications along the BRT corridor. But only a year later, in May 2013, four kilometers of the route, along Varna’s Vladislav Varnenchik Blvd, enjoyed a pre-election asphalt overlay worth nearly EUR 2.5 million, hastily forked out by Boyko Borissov’s first cabinet. During construction, it transpired that the cash had not only been released hastily, but also without any preliminary estimates. Why did this happen? Likely reasons are the by-elections for Varna mayor and the extra parliamentary elections held in May and June the same year.

Another BRT section along Maria Luiza Blvd. was renovated through the municipal budget in the spring of 2015. it never became quite clear how the last two BRT stretches, on Third March and Vassil Levski boulevards, got their funding.

Varna’s Deputy Mayor, Christo Ivanov, oversees this project’s construction but choses to evade questions asked about these issues. But the puzzle is not actually so convoluted. Unlike European funding, control over spending from the municipal and central budgets is exercised by the National Audit Office and the State Financial Inspection Agency. Their post-inspection reports have often stirred up fiery controversies, but those were quickly quenched in the corridors of the prosecution.

Several photos posted on social networks in early September 2016 also gave rise to doubts about the standards of project works. They showed the brand-new ticket vending machines on buses installed in the autumn of 2015 already “fixed” with cable ties (2) although they never worked a minute. Several memos to the Varna Municipal Transport Company’s CEO refer to the machines’ structural incapability to withstand vibrations as the reason for these bizarre retrofits–though they never began working. And this is far from being the only issue with them.

The deadline for their official release was “at any time” for quite a while (3). The latest “any time” was in early July 2016, when Bilyana Yakova, head of the Varna Integrated Urban Transport project, explained that “according to the contracting authority’s terms of reference and the contractor’s (Modern Transport Association) technical proposal, the automated ticket system has been tested and in operation“.

A ticket-vending system tested and out of operation

What the contractor had to do was to “only deliver and install machines with fiscal hardware, which had yet to be examined”. For this reason, another company, custom Engineering Bulgaria, was commissioned to examine the machines. It is not clear whether this has happened. But by early October 2016 (when this article was written), the tactile displays of these blue machines at Varna’s bus stops and in buses were still dark.

According to the ToR attached to the tender call, the vending machines for buses and stops were supposed to accept both coins and banknotes, return change, process credit and debit cards, charge public transport season tickets and calculate the remaining balance on them, etc. (4). Experts from potential contractors, however, have warned Yakova that since a bus would only have a single machine, this could lead to delays in service and long lines of people at peak hours. Besides these concerns, given the wide variety of functions cited above, operating with these machines in a moving bus could be hazardous to passengers’ own health.

Despite all suggestions and comments, the e-billing system was contracted and executed in its original version. Due to their size, the machines are now sitting in the only space that could fit them in the new Varna buses–the place meant for people with mobility problems and mothers with children in baby carriages.

Their exact price is still a mystery. The reason behind this is that the order to produce and install them was lumped within the total amount of EUR 7.4 million, along with the bus-tracking system. The latter’s key components–the light panels, the internet platform, and the mobile application were also reported to have been completed. Nonetheless, they still only operate in a test mode (5).

That part of the project set off a tragicomic scandal in late 2015. At that time, traffic information, copied verbatim from the similar site of a private company, which for years had been offering it free of charge for the public good, appeared on the municipal site www.itransportvarna.bg, created under the Integrated Urban Transport project.

Right after an attempt to set the record straight, this platform was shut down by its administrators without any explanation. A month later it turned out that it was already suspended for unpaid hosting. Ever since, any attempt to log in has only flashed: “The website is under scheduled repair!”

Varna Integrated Urban Transport’s most substantial component–the so-called BRT corridor–has not seen daylight due to the project’s obviously failing management system (6). Instead, the city was festooned with a network of bicycle lanes for the price of EUR 2.3 million, which triggered a wave of mockery. But that failed to impress anyone.

The only conclusive, reported on, and effectively working components of the project were its publicity actions(7). Despite all the false starts and delayed ends, on the eve of the local elections, in August 2016, EUR 400,000 was spent for publicity. And most of that cash went to media directly or indirectly connected with individuals from the local or central government.

Information system for management and monitoring of the EU structural instruments in Bulgaria, http://umispublic.government.bg/srchProjectInfo.aspx?id=67250

Dnevnik, “Top Secret”, or what did Varna accomplish on its Integrated Urban Transport project, http://www.dnevnik.bg/morski/2016/06/20/2780677_strogo_sekretno_ili_kakvo_svurshi_varna_po_proekta_si/