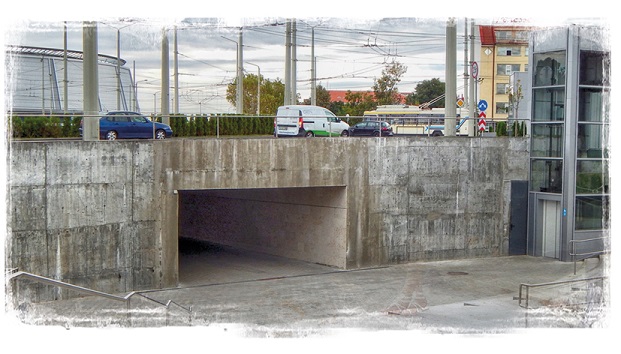 It is a familiar spot for everyone in this Danube town. Located in the city center, the traffic circle handles 80 percent of vehicle traffic, according to municipality data. That is why repairs were necessary. However, after nearly EUR 4.5 million spent, the spot hardly looks renovated while unpleasant surprises keep appearing.

At the time it was announced, the project “Integrated Public Transport System for Rousse”, sounded even more impressive than its name (1). It was promised that, after a EUR 4.45 million  reconstruction, the traffic circle and its adjacent area would become “a favorite meeting spot for Rousse’s youth”. Almost nine months after the launch of the most modern infrastructure project that Rousse has seen in decades, it is already falling apart. The question is: who is going to pay the bill?

This large-scale initiative was supposed to include:

The whole project was estimated to cost more than EUR 15 million, of which EUR 4.45 million without VAT was allocated for the reconstruction of this city center traffic circle.

As is the norm, the project took off amid legal hurdles, decision appeals, and misunderstandings. Initially, the municipality was brave enough to announce that the summer of 2013 was the starting date for the reconstruction works. Later, this forecast was changed to the summer or spring of 2014. Still later, Rousse’s citizens were promised that the whole project would be completed by July 2015.

The design and build contract was awarded to Monolitputkonsult Group, a consortium between Patinjenering Ltd, Monolit JSC from Haskovo, Injkonsultproject Ltd from Varna, and GTR Group Ltd. The project’s launch was set for January 19, 2016, when an official ceremony, attended by the regional development minister, Lilyana Pavlova, was supposed to be held. However, the official launch was postponed at the last minute due to expected unfavorable weather conditions.

Despite the sarcastic comments discussing the reasons behind the postponement, the weather conditions on the ground were even worse than forecast. Rousse and the region witnessed one of the heaviest snowstorms in years. Many towns and villages in the region were cut off from the world for several days, while schools had to cancel classes.

The unofficial opening, which marked the resumption of vehicular traffic in the area, took place on December 15, 2015 amid last-minute construction activity. The site was scheduled to open for traffic at 5pm. Many journalists had been invited to witness this event. They ended up observing the last-minute construction work for over two hours until traffic was finally allowed through the area at 7:30pm.

The following day, however, it became apparent that the pedestrian underpasses, part of the project, were hardly ready for any kind of launch. The lifts for people with special needs were not working. Construction work continued for at least a week. While drivers were enjoying the new asphalt roads, underneath them pedestrians were questioning the results of the reconstruction.

The whole internal part of the pedestrian area looked as if the construction work was anything but completed. It appeared as if the contractor had left the project without putting on the finishing touches. There was bare concrete everywhere that looked unfinished since the assembling structure between the blocks was simply left behind.

Here and there, it was possible to see the fittings and parts of the materials that had been used as a base for the construction. On the other hand, the six pedestrian underpasses were all covered in tiles and looked out of place next to the bare concrete. The security cameras, benches, and small kiosks which had been initially announced as additional features of the project were all missing. Also missing were the amenities necessary to turn the area into a “favorite meeting spot of Rousse’s youth”–as municipal officials had initially promised.

…and the asphalt started collapsing

The problems started as soon as the weather improved and the snow started melting. On  February 2, 2016, a month and a half after the area opened for traffic, some of the asphalt pavement at the traffic circle started collapsing.

New repair works began, lasting two days and further obstructing traffic. Then landscaping between two of the underpasses collapsed. According to the official explanation, this had happened because the soil was adjusting due to snow melt. It was announced that the contractor would pay for the repair works, since there was a five-year guarantee on the project.

Because of these problems, large cracks started appearing along the concrete structure of the traffic circle. This prompted Rousse Municipality to issue an official statement that the structure was completely safe for use by both drivers and pedestrians. The cracks were filled with concrete, which made the underpasses look even more like a construction site and even more unsightly.

A month later, tiles in the underpasses–where hundreds of citizens were passing daily–started falling off. While some said the incident was caused by vandals, experts claimed that the culprits were caused by a rush to meet deadlines and the use of low-quality materials. Since tiles at other locations had started falling off and had been replaced, people worried about their safety.

During the summer, following several superficial repair attempts, the contractor removed all tiles from the underpasses and redid the job (2). The municipality again reminded everyone that all repair work done within the five-year guarantee period was paid for by the contractor. Citizens had one explanation for what happened: substandard work. They were convinced that the final cost was doubled due to the rush of the contractors to meet the deadlines and collect the payments.

By the end of September 2016, one could also notice some of the smaller imperfections, mainly in the pedestrian areas. These included mud accumulating because of the badly laid-out landscaping inside the roundabout, poor storm water drainage, and further cracks in the concrete structure of the traffic circle. This was the situation at the start of the “landmark’s” second winter. When the five-year guarantee period is over, all new repair work to maintain this “repaired” project will be fully covered by the taxpayers.

Tiles Redone on a Wall in One of the Roundabout Underpasses in Rousse, Kiss 13 TV, http://kiss13.net/ruse/item/1203-svaliha-plochite-ot-pochti-cqla-stena-na-kragovoto-v-ruse.html