We have a new park around the National Palace of Culture. Can’t you see it?

We have a new park around the National Palace of Culture. Can’t you see it? 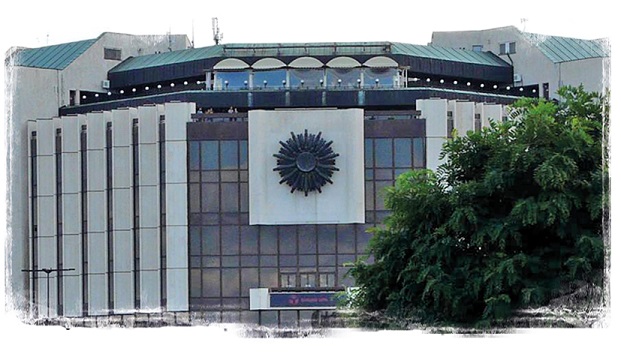 Cement-patched cracks, crushed cobblestones, joints overgrown with grass and weeds, swampy areas and flooded shops on rainy days. This place is the park around the National Palace of Culture in Sofia where, in early 2018, Bulgaria will welcome European leaders in its capacity as the EU’s presiding country. This project, “Park space around the National Palace of Culture: refurbishment and reconstruction”, is about to exceed EUR 8 million. It is also on its way to becoming an emblem of; the quality of the repair works carried out all over the national capital, the way EU funds under the operational Programs are being absorbed, how public procurement contracts are being dished out, and how Bulgarian taxpayers are being ripped off.

This story began way back in 2012. This was when the run-up to the park’s renovation project began (1). The call for bids announced in November 2013 covered the following construction: pavement (at some places only), curb and street lighting replacement; laying down pedestrian pathways; rebuilding the fountain, the water cascade, and the artificial water stream in the children’s playground sector; installing of a video surveillance system, park facilities and landscaping–all within the area fenced in by the streets Patriarkh Evtimii, Vitosha, Baba Nedelia, Bulgaria, and Fridtjof Nansen in Sofia. All this was just the fringe–the Culture Palace square itself was yet to be repaired. We will come to it in a little bit…

Nobody can argue that the park around the Palace needs repair. The whole commission was twice revamped and split into five separate ToRs. Yet work only kicked off in 2015, with a single goal–to be finished by the end of that same year, else we lose the funding from the Regional Development Operational Program.

This is how the bidding wound up: SK-13 Patstroy from Pernik would do the park and the flagstone surfaces, complete with bicycle lanes and lighting fixtures; Vodstroy-98 took on the landscaping, the park facilities cleaning and the automatic irrigation system; POLID Ltd was commissioned to install two automated public toilets; and Lirex BG-Sectron got the contract to build the area’s video surveillance. One of the operations–the fountain and the water stream restoration in the children’s area–was cancelled for not being able to attract more than a single applicant but was subsequently won by the municipal water and sanitation company.

Sofia residents were scratching their heads–why were the pavements being only partially mended given how crumbled or worn out they were? Mayor Yordanka Fandakova explained that the available funds could not cover all that. It was just a little later, however, that additional cash for unforeseen expenses poured in. The money went into refurbishing the fountain in the sub-level part by the Culture Palace and for replacement of the steel plumbing (water & sanitation company got just over EUR 100,000 for this service). In turn, SK-13 Patstroy got almost EUR 200,000 to meet some “additional circumstances”, e.g., pavement reinforcement, new frames for manhole covers, and lighting, etc. (2). This cash was now flowing straight from Sofia’s municipal budget rather than from the operational program.

The website of the Public Procurement Agency (PPA) gives an idea of how much was coughed up by Bulgarian and European taxpayers:

The website does not display information on the funds released to Vodstroy-98, but estimates go as high as BGN 1.25 million.

Together with the latest fountain contract, Water & Sanitation got EUR 0.9 million (3). An additional nearly EUR 45,000 was given for lighting, again to Water & Sanitation. The independent financial audit on the contract cost EUR 2,392 (4). Another over EUR 6,500 was spent on “awareness-raising and publicity”, including TV reports, twenty publications, one billboard, and one signboard (5).

God made time, man made haste

The crack repairs were completed by December 2015 whereupon user permits were issued. For all intents and purposes, the work was completed within 6 months, although the actual term spanned a whole year. However, issues began rearing their ugly heads even before completion (6). Shopping areas at the Culture Palace’s foothill started to ooze water, with the tenants claiming this had never happened prior to the repairs. Some of the grassy areas now resemble marshland while the pavements are submerged in water. Some of the contractors have been fined over EUR 300,000 in total. Mayor Yordanka Fandakova has been threatening that they would be made to fix the issues at their own expense, but what people still see a few months later is poor quality patching, gap-ridden alleys missing cobblestones, and joints bristling with grass.

In response to criticism from Boris Tsvetkov, an opposition municipal councilor, Fandakova claimed that the flooding in the outlet areas had existed even before the current repairs (7). She also listed what has been built or restored:

Who are these “top performers”?

SK-13 Patstroy is a subsidiary of SK-13 Holding Ltd. The company was founded in 1993 by privatizing Pernik’s Road Department into PatstroyComplekt, which later on became SK 13 Patstroy. according to open, published data, the company ranked second in the Top 20 of public procurement contract receivers during 2011-2015. Only Glavbolgarstroy came even higher. SK-13 Patstroy snatched a share of over EUR 400 million during a period of four years.

Vodstroy-98 got more than EUR 150 million, according to the same data. It was one of the companies within the orbit of the now bankrupt Corporate Commercial Bank (CCB): according to its former CEO Tsvetan Vasilev, the company is controlled by Delyan Peevski, an MP. POLID OOD has won no other municipal contracts in Sofia while Lirex BG-Sectron built the integrated video surveillance system in Sofia’s central parts as early as 2006. It has subsequently won contracts for almost EUR 1 million. The municipal water & sanitation company has usually appeared in tenders.

This is not all, folks

Even before the aftermath of this repair has been addressed, the saga is about to continue. The square right in front of the Culture Palace’s main entrance comes next. Its repair had been up for bid before, but at the time when prime minister Boyko Borisov was awarding several public contracts each day, the Sofia Municipality suspended the process for having just one single applicant. Yet a few weeks later the bid was on again, and its price tag had climbed to EUR 2.5 million from the tamer EUR 1.25 million (8).

This time the tasks included complete pavement replacement, i.e., to crash, sort and replace the existing granite flagstone, waterproofing, curbs, steps, cladding, banisters, walkways around the entire fountain, railings along the stairs to the subway, additional lighting on railings and fountains, drainage system, pedestrian walkways and tram stop platforms. These renovations are supposed to wrap up within five months. We have yet to see whether this latest rush will not lead to the same old story, i.e., whether after the latest EUR 8 million is coughed-up, the Culture Palace area will not need yet another repair.

(2) Additional construction works under the project, “Park space around the National Palace of Culture: refurbishment and reconstruction”, third stage. http://www.aop.bg/case2.php?mode=show_doc&doc_id=707059&newver=2

(4) Selection of contractor to perform an independent financial performance audit of project, “Park space around the National Palace of Culture: refurbishment and reconstruction”. http://www.aop.bg/case2.php?mode=show_doc&doc_id=691324&newver=2

(7) Mediapool,”Will someone repair the repair around the National Palace of Culture?”, http://www.mediapool.bg/shte-ima-li-remont-na-remonta-okolo-ndk-news248266.html

(8) The works around the National Palace of Culture have hit the cosmic EUR 8.5 mln. To avoid money being frittered away, another EUR 2.5 mln will be forked out to mend Bulgaria Square, http://www.mediapool.bg/remontat-okolo-ndk-dostiga-kosmicheskite-17-mln-lv-news243303.html